We don't publish these as often as we did during the height of the Pandemic, but with warnings of a general increase, readers can see here what the situation is. 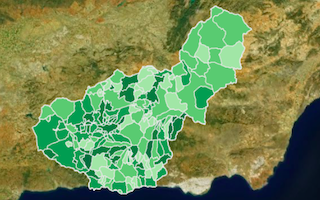 The Costa Tropical, or better said the seaside towns in Granada, all range from 421.6 in Albuñol (which has La Rábita on the coast) down to  96.2 in Torrenueva Costa. A little further inland but still technically the Costa Tropical they range between Otívar with 593.5 to Molvízar with 108.2.

Summing up, those with a contagion rate between 500 and 1,000 (excluding villages with fewer than 1,500 inhabitants) are: Albolote, Alfacar, Deifontes, Dúrcal, Granada, Guadahortuna, Lecrín, Padul, Peligros, Pinos Puente, Valderubio and Zafarraya.

Those villages with over a contagion rate of 1,000 per 100k, of which there are five in total all have fewer than 1,000 inhabitants, with the exception of Jayena, which has 1,015 in habitants.

Don’t forget, if where you live is not on the list below, it is because it has had zero cases in the last 14 days.