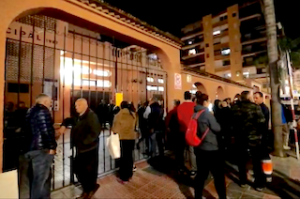 It was back in 2011 that newly installed Mayor Trinidad Herrera decided to close the municipal market, underground parking – what has changed?

We ran an editorial back then because there was more politics than common sense connected with the market building. Why, we asked, if the underground carpark was in danger of collapse, was the market above it not closed, too?

And this is where politics come into it. The company that was operating the underground car park at the time of the closure was a Motril one to whom was owed a favour by the then Mayor, Juan Carlos Benavides. The lease concession was in lieu of or an appeasement for, outstanding money owed to the company for building work done around Almuñécar, which had not been paid, allegedly.

The new Mayor, Herrera, perhaps – and this is only an hypothesis – wanted to hit Benny where it hurt, by going after the company’s concession. the irate company would come banging on ex-Mayor Benavides’ door.

So, as a theory, that explains why the car park was closed down (and the leaseholder kicked out) but even so the market was allowed to stay open.

During the intervening years Mayor Trinidad tried to get an investor interested in paying for the demolition of the market and building a new one; one that would have a smattering of stalls on the ground floor and a large supermarket on the upper floor. The new building would swallow the perimeter, paved area between the original building and the perimeter wall, a place of social gathering.

She might have had somebody in particular in mind but the fact is that nobody wanted to take this ‘hot potato’ on. So, we find outselves where we are today, with a lightning decision to throw everbody out and close it.

As readers know, the reason that the Mayor has given is that, according to a report on the structural integrity of the building, it is far from stable.

So, are we to believe that the market floor was perfectly safe after the basement car park was closed for eight long years until now? Why wasn’t it closed before and in a less spontaneous and arbitrary manner?

The fact is that with only 24 hours notice the stallholders have been caught with all their wares unsold: literally kilos and kilos of fish, vegetable and fruit. They were given no time, whatsoever, to prepare for closure and wind up their business without this loss.

Twenty-four hours to find somewhere to move their business to, somewhere to put into storage all their refrigerators and other stall machinery. And we’re not only talking about stallholders being out of a job, but their employees, too. As one stallholder asked, “Do you know how much it will cost me to lay off my two employees and pay them the compensation they are entitled to?”

In other words, thanks to the manner in which this closure was done, stallholders were not only faced with no incoming, but also plenty of expenses.

No, this was very shabbily managed, leaving more questions than answers. Yet, Sr. Benavides has no right to feel smug about it because he built this complete botch job of a building in the first place.