In March there was an important landslide not far from the Castell de Ferro exit on the A-7, as reported in the Seaside Gazette. 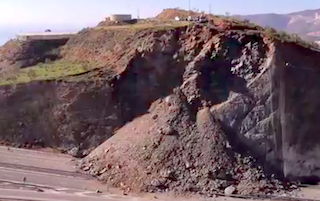 There was a danger of further rockfalls because of fractures in the rock stratas so it was decided to level the hillside, as clearing the rubble below would have brought more material down onto the work crews.

Originally both lanes were closed as the earth and rocks had completely covered the eastbound lanes and partially the westbound ones, too. In the meantime, all traffic was redirected along the old N-340. However, by April the 26th the westbound lanes were reopened but converted into a 2-way system, until now.

Now with one eastbound lane cleared and retarmacked – the road surface had been considerably damaged – traffic heading for Almería can now use that lane leaving the westbound lanes for normal use. Work continues on the remaining lane.

However, with the summer already upon us they are considering opening that lane too, for moments of intensive traffic. Furthermore restrictions within the Modroño tunnel and access to Castell on the eastbound lanes will be reopened.