The rainfall was not particularly violent or sustained, today in Motril, but recently modified Avenida de Andalucia was completely flooded.

In fact, the main opposition party (PSOE) believes that the flooding was caused by faulty design.

Socialist councillor, Francisco Sánchez-Cantalejo, accuses the governing party (PP) of having failed to manage an “enormous budget” from PFEA funds.

“On the one hand, they have spent over half the budget funds provided by the Junta’s PFEA, and on the other hand the new design of the said street has failed to eradicate its historic flooding problems,” said Councillor Sánchez-Cantalejo. 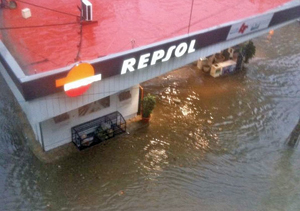 He continued, “It is impossible that work finished a few months ago should now have flooding problems.”

The PFEA funds are designed to go towards fostering rural employment and not for carrying out centre-of-town street work, he pointed out.

He concluded, damningly, “spending nearly half a million on street work without attending to proper rain drainage, gives a clear idea of what sort of management there is in the Town Hall.”

The Mayor of Motril, Luisa García Chamorro, on the other hand, says that the rain that fell during the night and morning reached 30 litres per square metre, in other words 30mm, according to Red Hidrosur. She also patted her team on the back for having insisted on clearing the dry riverbeds.

She considers that the rain had not caused any “serious incidents” within the municipality, but acknowledged that the Avenida de Andalucia received “a great quantity of rain water around 09.00h this morning.”

She also claimed that within 30 minutes the “situation had normalized,” whereas before the recent street work and under the same meteorological conditions, firemen would have needed to pump out water.

Where the firemen were used this time was to keep an eye on the normally dry riverbeds (ramblas) where the water level rose to within 40cm of bursting the banks.

Motril received a yellow-alert warning from 112 for heavy rainfall at 23.00h last night, so 15 volunteers from Protección Civil were put on standby.

Finally, the Vice Mayor of Motril, Nicolás Navarro, expressed his surprise at the accusation raised by the IU that the flooding around the gasolinera was because of defective design and execution work done on Avenida de Andalucía.

He pointed out that the recently installed rain drains cleared the water within 30 minutes, as stated above. He also claims that the 30 litres fell within the space of one hour, which differs from other official accounts.

Editorial Comment: in 2006 80 litres per sq/m fell in the centre of Granada in just one hour. 80 litres is considered as “torrential downpour” by the Instituo Nacional de meterologica. This rainfall did not cause “important consequences.”

I mention this so that it can be compared with the 30 litres per sq/m that fell in the space of not one hour but several; i.e. not as intense.