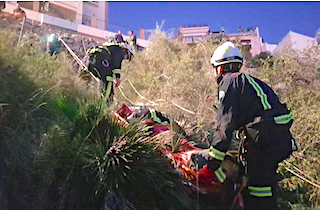 A British woman of about 70 was injured after her car left the road on Wednesday within Urbanización Monte de los Almendros in Salobreña, around 18.00h.

According to an eye witness, who was the first to reach the driver, the car had rolled down the barranco, some 50 metres, turning over several times. The witness, José Rivas, is a private security guard who works nearby.

“I had to get to her through the back door and I managed to take the seatbelt off, as it was hurting her neck but first I checked to make sure that she had no neck injuries. She did have an injury on her head and complained of a pain in her forearm,” explained José.

The Guardia Civil and fire service soon arrived and together they managed to get her out of the car and up the side of the barranco to the waiting ambulance.

The point where the car left the road was just up from the urbanizacion’s swimming pool, near the Roca Encantada.

Editorial note: a special thanks to José Rivas for permission to use his photo and taking the time to take the call from us.