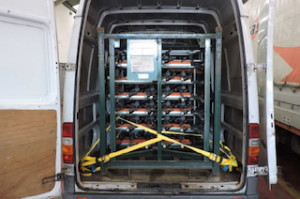 The Guardia Civil in Soria intercepted a van carrying 29 parts from Land Rover vehicles, valued at 30,000 euros. The van was on its way from the UK to Málaga.

The Spanish police contacted the car manufacturer, Jaguar, in Liverpool who confirmed that the impounded car parts had been stolen last year in Liverpool and that they had reported it to the British police.

Once their origin had been confirmed, the parts were handed over to the Jaguar offices in Madrid and the find reported to the judicial authorities.

However, police investigations continue in collaboration with the British police.