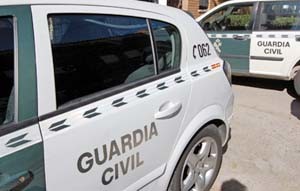 The Guardia Civil in Salobreña have arrested two women as suspected pickpockets who target the elderly for their jewellery, using the ’embrace’ method.

The modus operandi is to approach and embrace the victim in the street whilst at the same time removing their objects of value.

According to the Guardia Civil, the women, aged 27 and 22, both from Romania and residents in Getafe (Madrid), were caught red handed on a Salobreña trading estate: one of them was embracing an elderly person in a wheelchair, who was wearing an necklace of considerable value. The other woman was keeping watch.

A Guardia patrol from Motril, tasked with combating robberies in rural areas, saw what was happening and arrested the woman. Upon searching her they found the necklace hidden within her clothing. The patrol quickly arrested her accomplice, who had tried to flee the scene.

The police have not ruled out that the arrested women are connected with similar robberies in different areas around the province.