Two minors and two adults were injuried in a collision between a lorry and a family car last night on the N-323a. 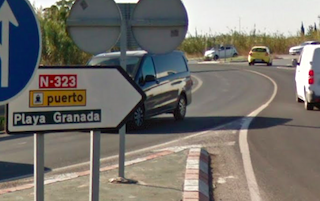 The accident occurred a little after 21.30h on the Camino de la Vía near kilometre-point 12. This is the name for the road leading down from the N-340 junction with the road to Granada; in other words, the main road down to Playa Granada running past Ron Montero, for example – it’s a straight road with good visibility, normally.

The four victims involved (a boy of 11 and a girl of 15, and two adults, a 47-year-old woman and a 57-year-old man) were transferred to Hospital Santa Ana.

The circumstances of the accident have not been made known; i.e., whether it was a head-on collision on this road with a single lane in either direction, or whether it was because the car or lorry had pulled out into the path of the other vehicle.