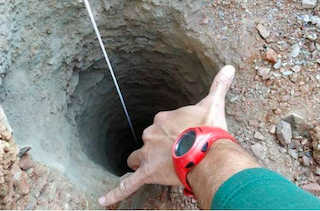 With yesterday came a full week of desperate efforts to rescue the toddler, Julen, from down a narrow bore hole.

The update given by the authorities at 20.00h yesterday evening was that by this morning they will have reached 75 metres depth in the rescue tunnel that goes down vertically beside the narrow bore hole where the child lies trapped.

Things have taken so long because the bored rock went from ‘hard’ to ‘very hard’ – it took them seven hours to cut through just five metres, for example, up to 20.00h.

However, the hardness of the rock also has its positive side; the tunnel walls will be solid and not given to cave ins. Once they reach the 75-metre mark they will start lining the vertical shaft with sections of metal cylinders.

Two brothers have designed and built a rescue cage that can take up to 300 kilos and will be lowered down by a mobile construction crane. The cage can hold two miners and the child. Miners are needed because a connection passage will have to be dug by hand to reach the original shaft.

So, if everything goes accordingly, they should reach him by midday today…

But the fact is, a toddler just over 2-years old, locked in a very narrow, completely dark hole for over a week, probably injured, to boot… The only thing in his favour at the moment is that at this depth it will be a lot warmer than the winter temperatures on the surface.

The plight of this small boy has been on the pages of major newspapers and spoken about on news programmes, around the world, not just here in Spain. Everybody has their fingers crossed in hope.