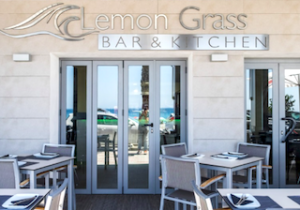 Restaurante Lemongrass was opened along with La Caleta Bay Hotel in 2016. The founder of La Caleta Bay and Peña Parda, Bernice, is from Macau and she took over the management of the restaurant in 2018.

The tasting menus are created to attract all diners and to steer people away from the image that Japanese restaurants only have sushi and cold food. As such, the tasting menus have many different combinations of flavours and styles that will tempt the taste buds of everyone.