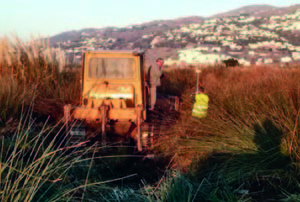 Only two weeks have gone by since the news appeared on the hotel beach area in Salobreña and now heavy machinery is already in action.

The first task entails clearing the land of vegetation, which for the most part has laid uncultivated for several years (fallow). Once it is clear, it will be surveyed.

The Town Hall asked for the fringe of land running directly behind the beach to be left for the moment. This was because there are several beach-shacks there and the Mayor wanted their owners to have time to remove whatever is stored in them – normally beach equipment. They have until the 7th.

The Mayor, María Eugenia Rufino, compared the news on the commencement of work there as “like winning the lottery,” especially because of the jobs created.