Today the new renovated bank branch of the Caja Rural reopens in La Herradura. Meanwhile over in Almuñécar, one of the two branches has closed down. 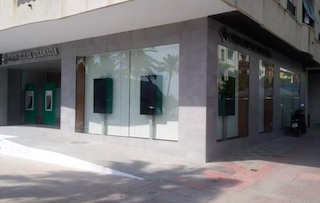 The new office, which you can find at Paseo Marítimo Andrés Segovia 22, has been undergoing renovations since June, according to the branch manager, Antonio Montes.

“The new branch has an area of 200 sq/m, two ATMs, three digital information panels and an access ramp for those with mobility problems,” he explained.There are four members of staff there: a manager, deputy manager and two clerks.

The premises used to belong to  Banco de Santander and before that Banco Popular.

Which brings us onto the branch that was closed down in Almuñécar, because the La Herradura manager came from there, where he occupied the same post. The previous manage of the La Herradura Caja Rural, Pilar Álvarez has been transferred to  Vélez Benaudalla.

The trouble with the closure of the branch on the Avenida de Andalucía is that anybody who had an account there (me, for example) have had their 20-digit bank account number changed, which is a veritable pain. Furthermore, you now have clients from both banks trying to be attended at the remaining one, which is in front of the old municipal market. There is also just the one Caja Rural ATM for the whole of Almuñécar now.