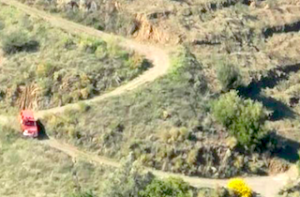 A Belgian driver died on Monday after the car left the road and tumbled down a barranco some 200 metres.

The accident involving the 65-year-old Belgian woman took place within the municipality of Árchez close to  the MA-5104 (Cómpeta road) around 13.45h. The victim’s husband was also in the car and is reported to have been seriously injured.

It appears that the driver had made a mistake whilst carrying out a turning manoeuvre on a track after visiting a friend’s house in the country.

The Toyota Aygo, which ended up in the riverbed of the Río Turvilla and was a rental car, was a complete write off.

The fire-service personnel had a very difficult task in reaching the car and bringing the victims to where an ambulance was waiting. A fire truck can be seen making its way down in the photo above.