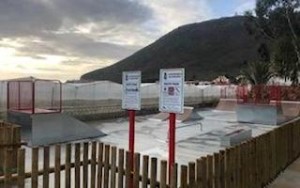 Castell de Ferro has decided to provide a skateboard park as part of its push for new leisure activities around town, especially for youngsters.

Actually, the park, which had a budget of 25,000 euros, is really for bicycles, skateboards and rollerskates

It was last year that the political party, Ciudadanos, proposed such an idea during a Plenary Meeting of the Town Council and everybody thought that it was a splendid idea.

So, the park is up and running on its 250 sq/m plot next to the football pitch. The Town Hall also considered placing it within the green area of the existing park but later decided that the football pitch was a more popular place for youngsters.

A bed of concrete covers the whole skateboard park with several ramps placed within the area. The park is enclosed by a wooden fence around its whole perimeter, except for the entrance, of course.

Finally, the Municipal Sports Department has been in touch with a skateboard club in Granada to organise a skateboard exhibition with the best skateboarders within the province.