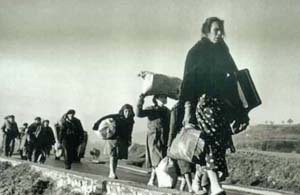 The IU opposition party in Almuñécar proposed in the last Plenary Meeting of the Town Council that there should be municipal backing for the annual Desbandá Marches.

La Desbandá was the 1937 refugee flight from Málaga to Almería along the coast, harassed all the way by naval fire and aircraft – thousands of civilians died. Whereas the Guernica blitz is widely known outside Spain, La Desbandá produced many more deaths and was the largest single loss of civilian life during the whole of the Spanish Civil War.

The pursuing Nationalists forces were aided by Italian, Fascist and Nazi forces for no military objective other than to cause panic – a tactic that the Nazis would use in 1940 against refugee columns in the Low Lands and France.

Not only did the refugees pass through Almuñécar, but also many townsfolk joined the masses in fear of reprisals from the advancing fascist forces. In fact, I have spoken with Almuñequeros that were amongst them as children at the time.

As expected, the ruling party, PP, voted against the motion so it was not passed.

Editorial comment: the PP habitually votes against any measure that in any way criticises the fascist dictator, Franco, be it opposing the removal of statues and street names in honour of Franco ministers in Galicia and generals in Madrid, or something like this in Almuñécar. The PP Central Government, for instance has stripped a law approved by the previous socialist government of funds; the law was to aid families in recovering the bodies of victims of fascist reprisals who had been executed and buried in unmarked mass graves all over the country.